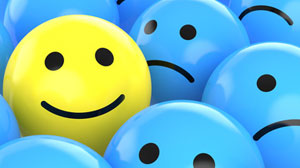 Compelling research evidence exists that there is often a neurophysiological basis for depression, particularly in people with a family history of depression. Neuroscientists have discovered a particular brainwave pattern that allows us to identify individuals with a biological predisposition for developing depression. This biological marker appears to be very robust (Davidson, 1998a, b), having been replicated many times in brain mapping research utilizing quantitative electroencephalograms (QEEG) and other forms of neuroimaging. It has even been found in infants of mothers with a history of depression, compared with babies of women without a depression history (Reference: Dawson, Grofer Klinger, Panagiotides, Hill, & Spieker, 1992; Dawson, Grofer Klinger, Panagiotides, Spieker & Frey, 1992).

Part of a brain map from two different people is reproduced below. The map on the left is from a person with a long history of depression. You can clearly see in the left frontal area (which is colored orange and yellow) that there is an excess of slow, alpha brainwave activity. This is the pattern that has been classically associated with a vulnerability to depression. In contrast, the brain map on the right displays how a relatively normal map would look, without any excess or serious deficit.

It is interesting that research has found that antidepressants do not correct the type of brainwave pattern that we see above on the left. Thus, medication treatment for depression appears to still leave intact the biological predisposition for becoming more easily depressed when unpleasant life circumstances come along. There is also new evidence that has found that on average, antidepressant medications only have an 18% effect over and above placebo effects (Antonuccio, Danton, DeNelsky, Greenberg, & Gordon, 1999; Kirsch, Scoboria, & Moore, 2002; Kirsch & Sapirstein, 1998), and medication may only be mildly effective in treating anxiety as well (Antonuccio et al., 1999). In contrast, we know that psychotherapy for depression compares favorably with medication in short-term follow-ups (DeRubeis, Gelfand, Tang, & Simons, 1999) and appears to be superior in long-term follow-ups (Antonuccio, Danton, & DeNelsky, 1995; Hollon, Shelton, & Loosen, 1991).

Neurofeedback treatments for depression (Baehr, Rosenfeld, & Baehr 1997, 2001; Hammond, 2000, 2004) appear very promising not only in bringing relief from depression, but in modifying the underlying biological predisposition for becoming depressed. Neurofeedback focuses on retraining the brain, for example, reversing the frontal brainwave asymmetry, with the goal of producing an enduring change that does not require people to remain on medication indefinitely. Training often requires about 20 to 22 sessions.

This article was taken from the website of The International Society For Neurofeedback & Research. For a full list of references on this article, you can visit the original article here.